A two hour tour. Includes all must see stations of the Moscow metro 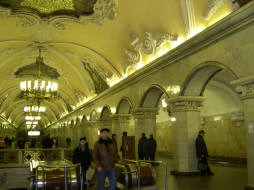 The best time to take a tour of the system is in the evening. The best station are on the Circular Line associated with the major inter-city and international railway stations.
Our guided tour takes about 2 hrs.-->

The Moscow Metro is a work of art, an amazing achievement in engineering and a monument to human endeavor.

In response to the rapidly growing population of Moscow from 1917 to 1930 Stalin decided to solve the transport problem with an underground system. The Moscow Metro was designed not just to carry people but to showcase the achievements and possibilities of socialism.

With over 260Km of track, sometimes as deep as 86m, many of its 165 stations are more like art museums or cathedrals. Built with the finest marble, wood, copper and bronze, brought from all over the massive Soviet Union, they display high arched ceilings supported on marble columns and are hung with massive chandeliers. Rich mosaics, sculptures and relief's depict great moments from Russian and Soviet history.

Although often crowded (8-9 million passengers on an average weekday) there is never more than a 2-3 minute wait for a train. The system shuts down at 1.00am for maintenance and cleaning.

RUSSIA TRAVEL PACKAGES
A selection of Russian tours to take as they are or adjust to your needs.

THE GOLDEN RING
Visit the heart of ancient Russia. What is the Golden Ring?

MOSCOW TOURS
What you can see in Moscow.

ST. PETERSBURG
Some of the sights to see in Petersburg

RUSSIAN DIGS
Come and work in the field on a Russian Archaeological dig. Full training given on site.

TRAVEL TIPS & SERVICES
Getting around in Russia

Moscow and the Golden Ring of Russia.

The Sculpture Garden and Gorky Park.

Hermitage Museum with one Treasure Gallery.

The Gems of Baikal.

Trekking to the Khamar-Daban Mountain Range.

Rafting on the Irkut.